Baseball in Your Blood

Baseball In Your Blood

When my phone rang I was in the small Alaskan village of Shishmaref, just south of the Arctic Circle. It was my Dad calling from Iowa, and I always savor these calls as they bring a taste of home to me when I'm far away. This call was an update on the latest minor league baseball game he'd been to in Rickardsville with his neighbor Craig Dorr. Craig was a pitcher at Wahlert in the late 1970s and was supposedly pretty good. It was humid in Iowa and baseball was happening. I could picture it all very clearly and it made me smile.

A few weeks later when I made it back to Dubuque for a visit, Dad was pretty excited I was home.  Usually I'm okay help with weeding the garden, but that is hardly something he gets giddy about. This time, he was waiting for my Little League skill set. You see, I was catcher during my years playing baseball and Dad was anxious to get Craig to pitch to him to see how good he really was.  All he needed to make that happen, was a catcher, and now he had one. It was just going to be three Iowa boys out on a ball diamond in the humidity and the sweltering August sun, seeing if we could relive the days when we really played baseball. Our ages didn't seem to matter to any of us, Dad being 80, Craig 55, and I'm 49, though Craig was a bit worried about a stray pitch hitting my Dad, so he thought we ought to have a helmet, at least.

We all piled into the car to find a ball diamond, with what gear we could conjure up, which consisted of 8 baseballs and a glove for Craig, an umpire's mask and my Dad's old catchers mitt (that he brought back from Japan when he was in the military, which was in 1962) for me. And the only helmet we could find, my Dad's old motorcycle helmet from when he had a Harley back when he was in his twenties. Oh and my Dad's favorite wooden bat, handmade by a friend in New Vienna.

We checked a few fields but none had a proper pitching mound that Craig needed. We ended up behind Wahlert High School on their practice field. As Craig got warmed up and I tried to get comfortable again behind the plate, catching a fast ball and then a curve ball. I realized Craig was throwing really hard for a guy in his 50s. His fast balls still had heat. His curve balls were breaking. And he had decent control. And then I wondered what I was doing enabling my 80-year old father to step into the batter's box, and what could possibly happen. But he did, and sure enough, he can still hit a ball, even at 80-years old. Now, understand, Craig didn't get every pitch over the plate, but most of them. And I didn't catch every pitch, but I got a lot of them. And Dad didn't hit every ball, but if it was over the plate he did. I think he only missed two. And if that wasn't enough, he stepped out of the batter's box and stepped back in on the other side of the plate and hit nearly every ball left handed. Craig and I were both mystified.

As we drove home and reminisced about our own glory days on the field, we learned that my Dad has mono-vision, which doesn't allow much in the way of depth perception. Craig and I looked at each other and just shook our heads wondering how he was able to hit the ball at all. It was then that I realized we really were just three Iowa boys that share the love of the game and will still jump back onto a field whenever the opportunity might arise, no matter age or ailment. I hope it's always that way. With a father that's 80 and still able to hit the ball, I'm pretty sure it will be.

Troy Henkels is a native of Dubuque and a 1985 graduate of Wahlert High School.  He lives in Denali Park, Alaska, where he writes about his adventures and experiences from around the world.  His book "Life On The Edge" is available at Thonline.com/store 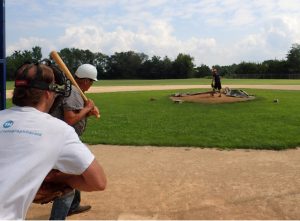 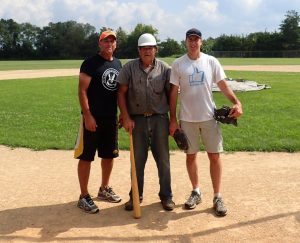