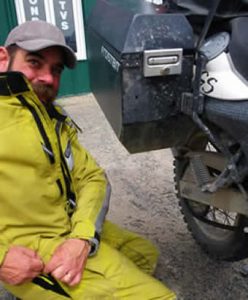 Tracy started his riding career started on a Honda Z50 at the tender age of 11. After too much time spent on the back of a Triumph chopper he figured out he was more suited to off road riding and not being a passenger. He rediscovered his love for riding on a cross country trip with his wife Mary Lee, from Arizona to Alaska. Since then he has owned countless bikes from touring, dirt, trials, and even a fat tire mountain bike. He has an endless list of epic rides on his resume: Prudhoe Bay, Kantishna, the Trans-Labrador Highway, Trans-America Trail, Iceland, India, Vietnam, and South Africa. The ride through Central and South America has been on the list from the start. 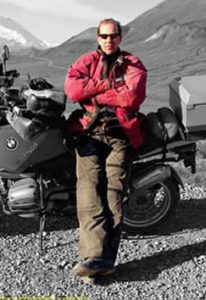 Troy grew up riding motorcycles and discovered BMW's when he was four and went for his first ride on his Dad's BMW with his Dad, Mom, and two brothers. In 2005 he bought his very own BMW for a 10,000 mile round trip ride from Arizona to Panama. Since then he's logged miles to Kantishna, Prudhoe Bay, the Alcan, and the Trans-Labrador Highway. The ride through South America has been on his mind since he left Panama.