Wild Times on the Bagley Icefield

Wild Times on the Bagley Icefield 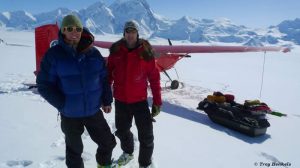 A kiteskiing expedition crossing the largest non-polar icefield in North America started like most great expeditions do, with an idea, a map, and a good friend. Jason and I had done a successful kiteski crossing of the Harding Icefield, also in Alaska, several years ago. Although on that trip there was little kiting and some extremely challenging hardships, it left us wanting for more. The obvious choice was the Bagley. But a crossing of an icefield this size is daunting to say the least. It is six miles wide, 127 miles long, and 3,000 feet thick, and calling it remote is an understatement.  The Icefield is firmly rooted in the largest National Park in the U.S., Wrangell-St. Elias. The Park and Icefield start in Canada and stretch a third of the way across Alaska and have very few roads.  It's sheer size is astounding, not to mention the rugged mountains and endless glaciers, the largest being Mt. St. Elias. At 18,008' it's the fourth largest peak in North America.

After several months of preparations, Jason and I left our homes in Eagle River, Alaska and drove four hours to the small township of Chitina. There we met Paul Claus, the iconic bush pilot that knows this Park like no one else. He's the best pilot around and flies us deep into the Wrangell's and drops us off right near the Canadian border. With Mt. St. Elias towering before us, we all know how lucky we are to have clear skies for the start of an expedition. The place is absolutely stunning beyond words. When the sound of airplane noise fades over the horizon, there is nothing but silence, and wind.  Jason and I look at each other and know it's time to do what we cam here to do. Put our kites in the air and let the wind carry us and our sleds towards the other end of the Icefield.

After an hour and a half we've covered over eight and a half miles before the wind dies and we set up camp. With clear skies we take in a stunning sunset while the temperatures begin to plummet.   By morning it's a perky -20F with a stout wind putting it at -48F with wind-chill. We take our time and wait for the sun to rise over the mountains before we pack up camp and get on the trail.  Despite the frigid temps, there is wind, so we put kites in the air and manage another 15 miles before the wind dies. By this time the Icefield has warmed up and we spend hours dragging the sleds behind us, earning our mileage the hard way. By the end of the day Jason's observation is that "walking through the mountains allows one to really think through and organize one's thoughts, and appreciate what you have back home". Which oddly enough is one of the reasons I give when people ask why I venture into the wilderness.

The next morning the temperatures are brittle, but we hit the trail dragging sleds hoping for wind.  After several hours I realize we have walked right into a minefield of crevasses. Realizing the magnitude of danger that crevasses present, I'm disgusted with myself, as I had spotted this hazardous area from the air and knew we needed to avoid it. Fortunately I recognized it in time and we were able to back track out of the danger zone without incident. Before long we both start to notice a slight breeze and put our biggest kites in the air. There is just enough wind to get us going and we work this slight but steady breeze for hours and put miles between us and the crevassed area. Eventually the wind picks up and gets quite strong. We contemplate setting up camp, but decide to fly our smallest kites and see how far we can get. We get in three more miles before the wind dies at 6pm. We logged 14 miles in total and finish setting up camp just as a layer of clouds sock in the Icefield and it starts snowing. I look at the thermometer and it's 28F! 48 degrees warmer than two days before!

By 3:00am I'm wide awake listening to the wind gusts rock the tent, wondering if I anchored the tent well enough. By 7:00am I'm absolutely terrified. The storm raging outside is unexpected, and for good reason, has us both on edge. With winds gusting to 50mph I know I have to do something or we'll be swept off the Icefield, inside our tent. Jason stays in the tent to provide some weight to hold it down, while I gear up and venture out into the storm. It's a total whiteout and I struggle to keep on my feet as I slowly but deliberately start building walls of ice and snow around the tent to protect it from the relentless wind. After an hour and a half I'm confident we're safe. By 9:00am the storm has intensified and we're experiencing sustained winds between 60 - 80mph!! To say being in those kind of conditions in one of the most remote places you can get is unnerving, would be an understatement.

The storm rages for six hours before the wind disappears. Glad to be out of the tent, we further fortify the walls around our campsite as we are still living in a whiteout and suspect there's more to come. By the following morning there's over a foot of fresh snow and we dig out. With zero visibility it's not a travel day so we hunker down in the tent for long discussions and even longer games of gin rummy. Overnight, we get hammered with winds from the east. Even though we are relatively safe in our fortress, on an expedition like this, in a place this remote, there is an extremely fine line between fun, survival and death, with a little room in between. It's on both our minds as we feigned sleep.

By morning the wind is gone and there's four feet of fresh snow. We're absolutely buried and spend hours digging out before retreating to the tent for more gin rummy, melting snow for water, cooking food, and the endless discussion about the weather. Before it's all over we end up being tent bound and isolated in a complete whiteout, for four days and five nights with some of the worst weather I've ever experienced on an expedition. On our eighth day on the Icefield the weather finally breaks and we see blue skies and slowly but assuredly the Icefield reveals itself.  With a slight wind building we put kites in the air and kiteski around camp in blinding sunshine. After a few hours the weather has cleared and the wind is good enough we decide to break camp and start putting in some miles down the Icefield. I make a quick call to Paul Claus on our satellite phone to let him know we are okay. His daughter answers and says he'll be on the ground in a half hour to pick us up. There's another storm coming in from the Gulf of Alaska and we either get out today or it will be another week before the weather is due to clear again.

Just as we finish breaking camp, the sound of an airplane breaks the silence on the Icefield. We're actually pretty happy to see a new face and get on the plane for the long ride out. When we land on solid ground back in the relative civilization of Chitina (pop.126), it's with a big sigh of relief from both of us that we made it out of this one unscathed.

On the long drive home, the discussion revolves around the fact that, in spite of, and maybe because of the storm, being on the Bagley was a pretty special experience. It dawned on me that expeditions are really just like everyday life. There are good times and bad times and things rarely go as planned. And most times there's no telling what's going to happen next. But with a good friend by your side, it always works out.

Troy Henkels is a native of Dubuque and a 1985 graduate of Wahlert High School.  He lives in Eagle River, Alaska, where he writes about his adventures and experiences from around the world.  His book "Life On The Edge" is available at Thonline.com/store